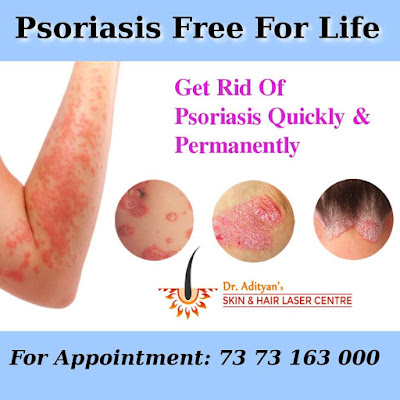 Psoriasis is a common skin condition that speeds up the life cycle of skin cells. It causes cells to build up rapidly on the  surface of the skin. The extra skin cells form scales and red patches that are itchy and sometimes painful. Psoriasis is a  chronic disease that often comes and goes. The main goal of Psoriasis Treatment In Sivakasi is to get rid of your psoriasis  effectively.

Ultraviolet light kills T cells in the skin, which reduces inflammation and excess skin cell growth. Phototherapy can be in   the form of sunlight or controlled treatments with artificial light administered in a doctor's office or in a Specialised  clinic like adityan skin and hair laser centre. Phototherapy treatments include:

Sunlight: Short doses of sunlight help clear psoriasis, but sunburn can worsen it, so patients must monitor their time   outdoors closely.

UVB phototherapy: In this treatment, patients expose their skin to ultraviolet light B. A newer source of the light, called   narrow-band UVB, emits the part of the ultraviolet spectrum that may be most helpful for psoriasis. It often takes at least   two or three months of regular exposure before psoriasis clears up. Doctors may prescribe UVB phototherapy in combination   with topical treatments.

PUVA: This treatment combines a medication called psoralen with exposure to ultraviolet light A, or UVA, which makes the skin   more sensitive and responsive to UVA. According to the National Psoriasis Foundation, about 75 percent of people using the   treatment find that their psoriasis clears up for as long as a year. On average, it takes about 25 treatments to clear the   skin. PUVA has more short-term side effects than UVB, including nausea, headache, fatigue, burning and itching.

Lasers: The FDA recently approved laser treatment for psoriasis. The laser emits a high-intensity beam of light similar to  narrow-band UVB. The treatment is usually used by people with mild to moderate psoriasis that affects less than 10 percent of   the body. Evidence suggests that it takes eight to 10 laser sessions for psoriasis to clear up. These treatments also reduce  exposure to potentially harmful UV radiation.

Posted by Adityan Skin Clinic at 22:58